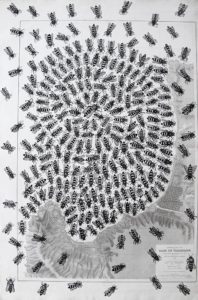 Thanks to my artist friend Franck Saïssi for letting me use one of his paintings to go along this article….

Lately, I have been reading foreign articles giving some perspective about the current affairs plaguing France (in particular the Penelopegate). Most articles (for example « Why is France so corrupt » ) imply that there should exist in France a greater tolerance to corruption, deepened in the historical roots of this country. The same argument had been brought forward at the time regarding the mores affairs with the DSK scandal. I would like to make one thing clear: there is no such tolerance coming from the French citizens. There is such a tolerance in the political sphere and the top upper-class circles, who very often are one and only. But 95% perhaps of the French citizens have no tolerance for such corruption and impunity traditions. In fact, they are truly revolted by such abuses of democracy. If foreign newspapers might be mistaken about this so-called tolerance, it is because of the apparent absence of reaction coming from the base. Well, the truth is that French people don’t have much of a choice.

The very first one you might think of is through votes. Alas, who can a revolted French citizen vote for? All politicians in France belong to the same caste, have studied in the same formative elitist school, called the ENA. (read this excellent article about ENA: « The French elite: where it went wrong ») Whether from right or left-wing, they behave the same way with public funds, perceiving all their privileges as normal, since it is not – the main line of defense from Fillon – illegal. Regularly, some of them get exposed with legal but immoral, or simply illegal affairs, depending on which head the French media want at a particular time, probably following their own secret interests’ agenda. Which has led to this current wacky situation within the LR party: after the Fillons’gate, the second candidate in the running who could have saved the LR party from suicide was Juppé. But Juppé is pulling his own ‘saucepans’, as French say, having also been sentenced to 2 years of jail for a fake jobs’ affair in 2004. But of course, politicians in France never actually go to jail, because, if they are, at the end of an endless trial, being found guilty, there is such a concept as ‘suspended sentence’ applying to them. So Juppé never went to jail, he spent his two years of ‘suspended sentence’ in Canada teaching economics in a university, like DSK, who was lecturing around the world after the scabrous revelations which forced him to stay away from the political arena…for a while.

Because the problem is that the French media, still following their own secret interests’ agenda, have a short memory. 2004 is such a long time ago, they have forgotten about Juppé’s mishaps. Furthermore, if one were to exclude all political candidates with a troubled police record in France, there probably wouldn’t be anyone left running for presidency. But ok, if the media is afflicted with a short memory, French citizens aren’t (or are they?). That is why they launched for some time several petitions (the only unofficial real democratic tool left in the French society) demanding that any political candidate to any election (Parliament, Senate, regional and department councils, municipality, presidency etc.) in France has a clean police record. This might sound incredible that it is not the case yet, when such a demand is issued to hold any ordinary jobs in the public function or even some private companies. So ok, under citizen pressure, such a bill will be discussed in the Parliament, but…oh too bad, not before the presidential election of 2017. And if it might be tough for politicians to openly vote against it, it will be however possible to postpone it ad vitam eternam, to the end of time.

Sorry, my foreign friends, I am totally digressing. But, as French say, ‘j’en ai gros sur la patate’, I have a lot on the potato, meaning, my heart is very heavy about all that….

So let’s go back to my first question: who can an outraged French citizen vote for? To express his/her protest? Of course, I am not even considering Le Pen. One solution would be the blank vote. Except the blank vote is NOT recorded and will add up to abstentionism. Lately, there has been a massive demand from French citizen to change this way of recording blank votes (still through petitions, the last actual democratic tool). But of course, this is, like the clean police records for candidates, not a top priority issue for French politicians. SO, a blank vote association is trying to present a candidate to run for presidency in 2017. This candidate will have as one and only function to materialize the blank voters at the first round of presidential elections.

BUT, in France there is such a concept as the 500 signatures for a candidate to presidency. What is that? At least 500 elected representatives of all kinds (Parliament, Senate, regional and department councils, municipality, presidency etc.) have to sponsor a candidate for him/her to be able to run for presidency. Of course, you’ll see right away without even my explaining all the excesses and abuses and pressure and blackmail that underlie this system. And of course, you’ll see that the blank vote candidate has little chances to get his 500 elected politicians’ signatures. We’ve come full circle. ‘La boucle est bouclée’ as French say. The French politician system is tightly locked against any changes and cleanings.

As I have said, I have a lot on the potato, and I guess this letter turns out much longer than I expected. I will stop here for now. To be continued….